In India’s Odisha State, fish farmers have been able to double their production from 2.5 metric tons to 5 metric tons per hectare per year thanks to a carp intensification program supported by WorldFish.

The program is being carried out as part of a six-year agreement (2016–2022) with the Fisheries and Animal Resources Development (F&ARD) Department of the Government of Odisha to increase the productivity of aquaculture through improvements in seed, technology and farming systems.

The partnership also focuses on improving the value chain for aquaculture products, with a view to positively impacting human nutrition in a state where over 25 percent of rural children suffer from acute malnutrition.

We provide technical support to the F&ARD. This support builds on learnings and experience from neighboring Bangladesh, where we have many years of success in scaling up production with new technologies and training.

Intensification of carp, a commercially valuable fish, is one of five components of the project. The others are promotion of carp-mola polyculture; introduction of genetically improved farmed tilapia (GIFT); enhancement of reservoir fish productivity and production; and GIS and spatial planning for better management of inland fisheries resources. 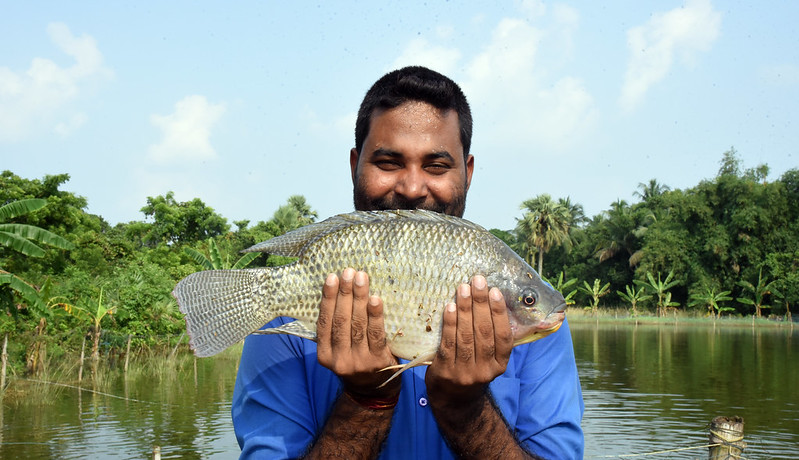 In Dhuanpari village in Jagatsinghpur district, 72 households share five community ponds totaling just over 7 hectares. Nutrient-rich small fish were already present in the ponds; the first stocking of carp took place in February 2018. The main species stocked are rohu, catla and mrigral and sometimes small amounts of grass carp, depending on the pond condition.

“We encouraged the farmers to stock ‘zero size’ fingerlings of 100–200 gr rather than the small seed they were used to. This has several benefits. It reduces the crop cycle by 4–5 months, allowing two harvests a year instead of one, and increases yields because the fish are more robust and less susceptible to predation,” says Dr. Trilochan Swain, WorldFish Component Leader.

“The community saw results after just two months of the improved practices,” says Dr. Swain. “The first carp were harvested in May 2018. Between May and September, a total of 2 metric tons was harvested, generating USD 2,145 in profit for each harvest. In addition, around 25 kg of small fish were harvested weekly, providing a source of nutritious food for household consumption.”

During the stocking phase, farmers were supplied with commercial feed via a government farm input subsidy.

“Previously, we didn’t use any feed,” says lead farmer Bibhuti Bhusan Dash. “Through the project, we received training on when to feed the fish and how much. We also learned how to formulate our own feed from agricultural byproducts and mix our own fertilizer. Some of the fertilizer inputs come from the community, like cow dung, and some of them we buy, like mustard seed cake. Combined, the technical interventions have helped us reduce our production costs by around 25 percent, from 60–65 rupees per kilo of fish to 45 rupees per kilo.” 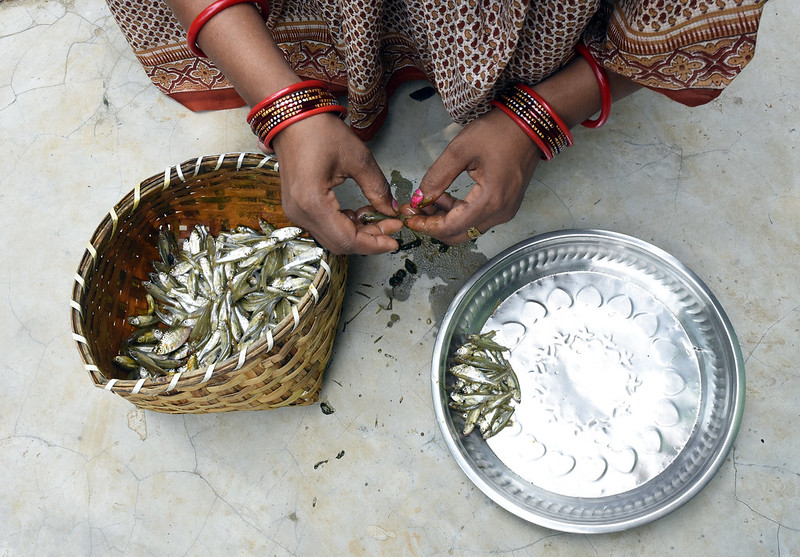 With the profits from carp sales, the community has continued to invest in its ponds, for instance building a guard house and installing two groundwater pumps. The groundwater is used to maintain the pond level and keep the water temperature stable, allowing year-round production.

“In 2018, these were the best performing community ponds in the project, serving as an example for other communities in the district,” says Dr. Swain. “We were initially nervous about getting involved in community ponds because they are the property of everyone and the responsibility of none. But this community has shown that with strong leadership, shared ponds can flourish.”